A woman in Pulaski, Virginia, says she was stopped by a squirrel, who tugged on her leg and led her to help its injured baby. 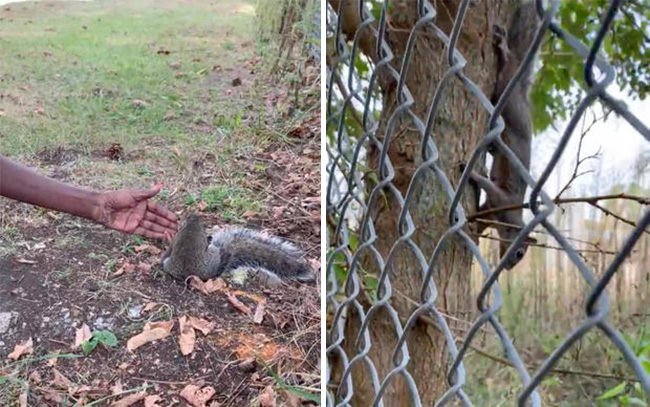 
Tia Powell was walking in Kiwanis Park when she was “approached by a squirrel,” the Pulaski Police Department wrote on Facebook.


The squirrel stood in her way on the trail. After realizing that the squirrel did not mean any harm and wasn’t going to leave her side, Powell turned around and the squirrel led her down the trail to a baby squirrel with an injured leg.


At one point, Powell wasn’t sure she could help and she began walking and the squirrel followed her again and actually tugged her pant leg!


So, she fed the squirrels a sandwich she had with her and watched them try to hop up into a tree. When she realized the baby squirrel was still struggling to get up the tree, she decided to call in backup.


Powell didn’t know how the baby squirrel got injured, but she thought a nearby stray cat was the culprit. So, the group of rescuers decided to move the squirrels to safer area.


“We were able to get the baby and mother to a different area with more trees and it was able to climb all the way up and they looked very happy,” Powell said.


She went back a few days later to show her kids where it all went down. In the trees, Powell spotted two squirrels staring at her, and couldn’t help but wonder if they were the same squirrels she rescued.

Related ItemsInternetViral
← Previous Story Teacher Carries Student On His Back So She Doesnand#039;t Miss Field Trip
Next Story → Cashier Pays For An Elderly Manand#039;s Groceries Without Telling Him